This is a follow-on from UseParentSpace for Relative Object Positioning and Scaling.

In the same way that child Objects can use the UseParentSpace property to operate within a Parent's relative position and scale… spawners can benefit from the same functionality.

In general when specifying what object to spawn, the object is given co-ordinates in world space like:

That can be confusing. Let's view it as a tree:

It is the Object to Spawn, that will use the UseParentSpace property.

But before we get there, let's set up a spawner in the usual way using world coordinates.

Start by making a rain cloud that spawns raindrops. Here's a cloud for you to use:

Define a Cloud object in config:

Then change the Object to Cloud in the create line in the code:

This will create a cloud object a little up from the centre of the screen. We haven't provided a spawner yet so it doesn't do anything. So define both the spawner and object to spawn with:

In the spawner config above, we're making RainSpawner spawn RainDrop objects, lots of them, in a fast down direction, but rotating the spawner by 22 degrees (plus using relative speed) to get a nice down-left direction for the rain.

For the RainDrop objects themselves, we vary their alpha transparency, stretched size and their starting position on screen between X = -50.0 to 90.0.

There is no image for the raindrops, we're just using a stretched pixel. That will do nicely. 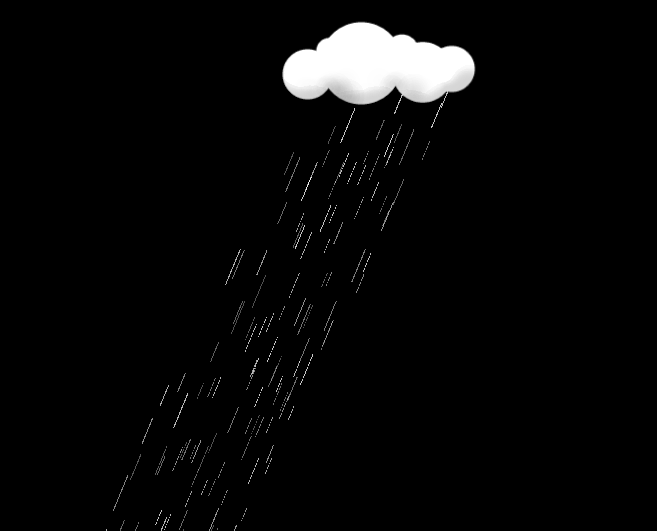 The last step is to convert the positioning to be relative to the Cloud's size. This means changing the Position property of the RainDrop and setting UseParentSpace to position:

The result should be the same: