Using objects with children that also have bodies can be tricky if they are required to stay fixed together.

When something collides with the parent or child, they will break apart. This is the expected behaviour. But it may not be the effect you want.

Our test object will be a crude ship that is in two parts. The main part will be the parent, the child will be the front section of the ship. A projectile is fired at the ship. If the projectile hits either part, the ship will separate.

Here are our two ship sprites, and a projectile.

First, we'll start with setting the physics, and the gravity and turning on the bodies for debug:

Begin with the main ship config. It will need Object, Graphic, and Body sections:

Next, the child part of the ship which is the front extra cockpit section:

Let's add this child object to the main ship as a child.

Next step is to define the projectile that will towards the ship from the bottom right of the screen and strike the ship:

The code in the Init() function to create the objects: 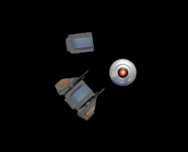 (The image above shows the projectile hitting the ship, but with physics debug off for clarity)

The projectile strikes between the main part of the ship and the child behind, sending both parts off in different directions. Normally this would not occur, but because a body has been added to the child, the two won't stay together if it collides with something.

This may be the effect you are after. If you have a multi-part object, you may wish the parts to break off on contact immediately.

However, if you want the whole ship to stay together during a collision, then you need to use a joint.

In our case we'll use a weld joint which welds two objects together. Or more correctly, welds a child (with a body) to it's parent:

Note the Anchor positions. These override any child position that might be defined on the child object.

Run again, and the projectile will first strike between the main body of the ship and the child section of the ship, and will send the whole spinning. But the ship stays together as a whole unit. 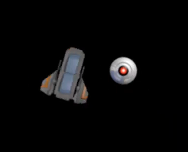 in a child BodyPart. The effect will be to remove rotation when a projectile hits any of the bodies.