The Binding of Objects in orx/Scroll

I keep a github repository for the code in this tutorial at https://github.com/fmahnke/OrxScroll-ObjectBinding. I like to keep the coding social, so please feel free to fork off my repo and create your own interesting projects!

What is "Object Binding"?

When we refer to “Object Binding” in this sense, we're describing “hooking up” a game object to a C++ class defining behaviors of the object.

This means when an Orx/Scroll Object is created, it can automatically be set to use a C++ class of choice for its implementation. This makes it easy to implement behavior that is specific to certain object types.

For instance, you want game objects to do certain things every frame. You want enemies to move on a path, or possibly attack. You want the player's character to be moved based on user input.

Additionally, binding objects to classes makes it easy to handle Orx events on an object-specific basis. For example, each type of object can have its own OnCreate function which is called whenever an object of that type is created. OnDelete is called when the object is deleted, etc.

In this tutorial, we're going to create a small game with two specific examples of object binding. We'll create an Enemy Bug object and a Hero object and bind them to classes. Our enemy bugs will move semi-randomly across the screen. Our Hero will be controlled by the player. He'll flash red if he collides with an enemy bug, showing that he's hurt.

If you have trouble following this tutorial, please let us know in the “Help Request” section of the Orx forums. The community is very helpful.

If your problems are related to physics (collision detection), it can be very useful to turn on physics debugging. This is done in .ini config. Just see the comments in the provided config.

Before you begin this tutorial, you need a basic Orx/Scroll project ready. For details on doing this, see the previous tutorial, An Introduction to Scroll.

This tutorial assumes you've made a new Orx/Scroll project by following the instructions in the previously tutorial exactly!

Get the Config Ready

You'll need to download these textures 1) for use in your config:

Then, you'll need to prepare this config in your main Orx .ini file for use with this tutorial:

It's all the typical object, graphic, physics stuff you've seen in previous Orx tutorials. Notice, however, we've added some extra properties to our EnemyBug and Hero objects. The Orx engine doesn't use these, but we'll use them later in this tutorial.

In Orx, you define objects in config files and create them at runtime using orxObject_CreateFromConfig. With Scroll, object creation is just as easy. In your class deriving from Scroll, modify your OrxScroll::Init function as follows:

Run your project. As you might expect, you'll see a few randomly placed enemy bugs in a gray expanse. Nothing happens since we've defined no behavior to control them.

Stop and think for a moment about how you might add behavior to the objects in Orx.

Giving the Bugs a Brain (Deriving the ScrollObject Class)

The first step to object binding is to create a binding class. To do that, we derive from the ScrollObject base class.

First, let's create the interface for our derived class. Create a file called EnemyBug.h and add it to your project. Add the following code to EnemyBug.h:

This class represents a single enemy bug. In our derived class, we override ScrollObject's OnCreate, OnDelete, and Update functions 2).

Let's create the class implementation. Add a file called EnemyBug.cpp to your project and add the following code to it:

This is all the code we need to bring our enemy bug to life. The code comments should explain what is happening, but note the following:

We've now programmed a much more interesting bug. If you run the game, however, you'll still see nothing but still objects. That's because we haven't yet told Scroll that we want our enemy bug objects to take on the behavior in our EnemyBug class. One step remains.

The ScrollBindObject function accepts as a template parameter a class deriving from ScrollObject. It accepts as a regular parameter an Orx config section name. Then it binds any instance of the Orx object to the class.

Add the following private function declaration to your OrxScroll class in OrxScroll.h:

The BindObjects function is called when the game starts. It basically says, “Whenever we create an object of O-EnemyBug as defined in Orx config, make it take on all the behavior defined in the EnemyBug class.”

Of course, the EnemyBug class must exist for this to work, which is why we made it first.

Run the game and you should see all your enemy bugs come to life.

Our Unfortunate Hero (Another Derived ScrollObject)

The bugs in our game must be very hungry! Let's add another bound object. First, add Hero.h to your project and write its interface.

Hero has a similar interface, but notice we've added an override for OnCollide. This function will be called whenever Orx detects a physics collision between this object and another.

And add this code:

The code should be almost self-explanatory. The hero's movement speed will be pulled from its config value. The update function (called every frame) sets the speed of the character based on what keyboard arrow is pressed. The OnCollide function adds a “flash” effect to the character.

Remember you need to modify the OrxScroll::Init function so it creates your O-Hero config object. Otherwise the Hero will not appear on the screen.

You also have to modify the OrxScroll::BindObjects function to make it bind the new Hero class to the O-Hero object. Otherwise, the Hero will not be bound to its class and will just stand still in the middle of the screen!

Try to do those things yourself. If you need help, though, here are the modified functions:

When you run the game, you'll be able to control the hero with the arrow keys. Be careful, the bugs will bite him if he gets too close and the OnCollision callback will make him “flash” red. 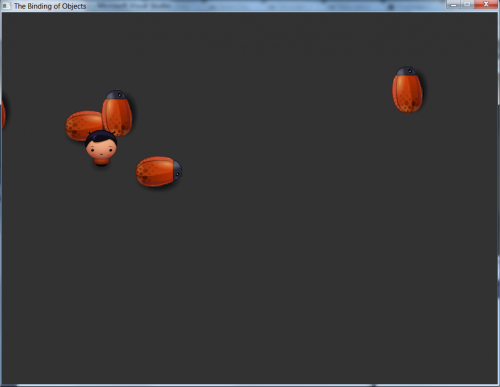 Well, you just finished making what could loosely be considered a game! Here are some additions you could make.

1)
Thanks to Daniel Cook of www.lostgarden.com for the great prototyping graphics
2)
Overriding OnCreate and OnDelete is required for any class deriving from ScrollObject
3)
Why use SetSpeed and not SetPosition? Because the objects in this tutorial have physics bodies. Calling SetPosition on objects with physics bodies messes up the physics simulation. If you want to watch that happen, change SetSpeed to SetPosition and turn on physics debugging as described in the config.
en/tutorials/orxscroll/binding-orxscroll.txt · Last modified: 2021/02/17 09:06 (11 months ago) by iarwain