Clearing a target can be very handy on objects with very simple behaviours. I recently had a requirement where an object would perform an animation every time another object collided with it.

As per other tutorials, my code called orxObject_SetTargetAnim and away it animated. However, because the object was not under any kind of input control, there was no opportunity to clear the target, and therefore, the object animated over and over.

This is where the cleartarget symbol becomes useful.

Let's work through an example to see how it works.

See below the following spritesheet of a spring loaded bumper. 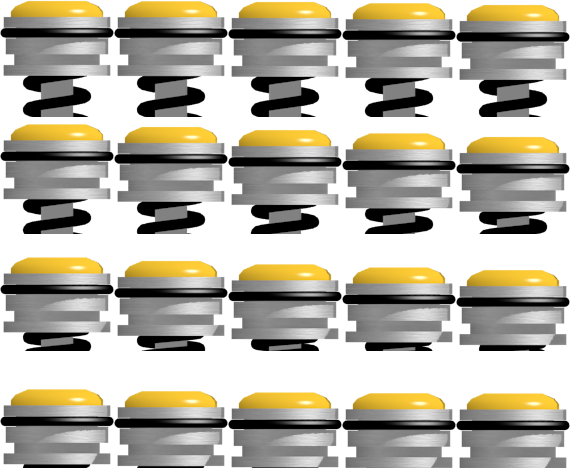 The job of this bumper is to spring up and knock away any objects that collide with it. After it has sprung up, it needs to compress down again and stay compressed until the next collision.

So that completes the animation setup.

In code, the bumper is defined at the top of the code:

and created in the Init() function with:

Add the following to the Run() function to start the animation target:

In code, if the object was under keyboard control, you could issue the following on keyup to clear a target from an object:

But our object is not cleared from code. We want it to clear after our target animation has completed.

Note that when the object is first initialised, “BumperCompressedAnim” is the animation that will play. This is because it is specified in the StartAnim property.

See how it is caught in a loop?

The secret is to change the list of animations linked to BumperCompressedAnim by adding the cleartarget marker. By changing this line:

Notice the ! symbol? In short, this means, once the BumperSpringUpAnim plays, clear the target.

That little ! is the whole the point to this article.

The object will no longer have a target, and BumperCompressedAnim will be the last animation to play.

That is until the object is given the animation target of BumperSpringUpAnim again.

This is a very handy symbol for objects that animate through once.