Every application that is built using Orx contains a profiler tool. The Profiler is compiled-in when using either debug or profile modes. 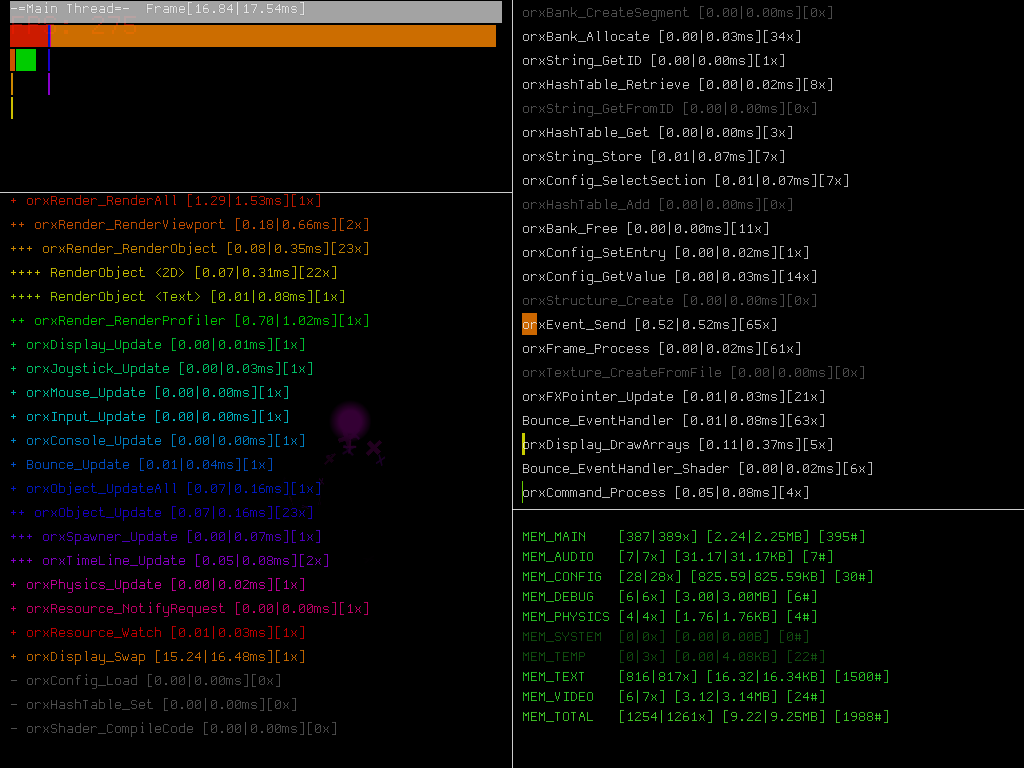 The tool helps you diagnose bottlenecks and monitor performance and internal resources.

To show the profiler in your game or application, add the following to your config:

Although it makes more practical sense to toggle it on and off with a key stroke:

Run your application again, and press the Tab key to bring up your Profiler. 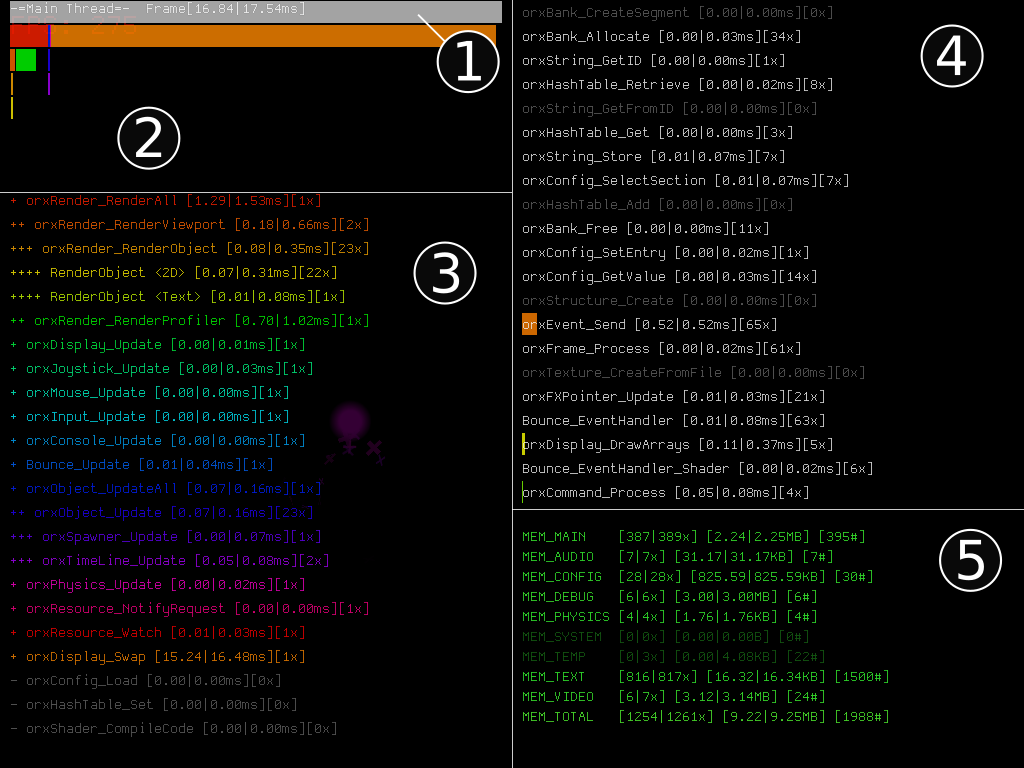 This grey bar indicates which thread is currently selected. Most of Orx's tasks run on the main thread. There are other threads that handle things like streaming audio, resource requests and bitmap decompression. Select your thread with the Page Up and Page Down keys.

These colored meter bars indicate how much time each Marker took to complete within the frame. The colors themselves correspond to the colors on each Marker in the Marker Panel. 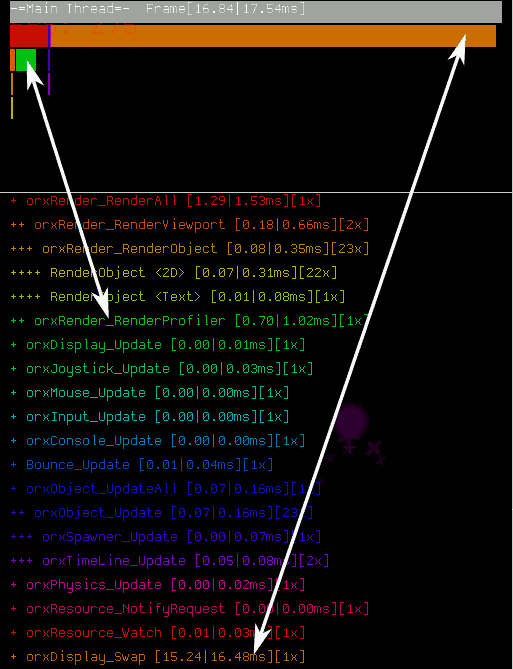 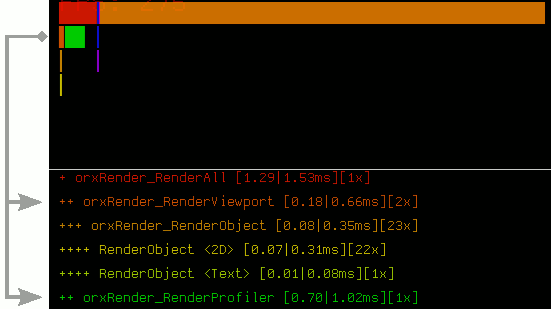 This helps easily distinguish between the markers that are of similar color.

The last number shows how many times this Marker was run in the frame.

You can even add your own custom markers.

The grey markers indicate functions that were called at some point - but not during the frame. So they will show having run 0x times.

The Markers in this panel are white and have more than one parent. Therefore they don't fit in to the tree hierarchy.

These markers can be grey in this panel as well for the same reason as the Marker Panel above.

Each line represents a different type of memory. 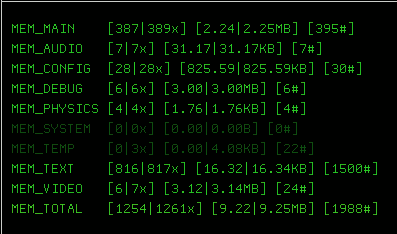 The first group of numbers represents the number of live allocations and the second number is the max allocations in the past.

The second group of numbers is the same, but is now representing the size of the memory allocations.

The last number shows the amount of transactions since the beginning of the application. A transaction is the allocating or de-allocating of memory.

In the demo playground application, the memory will not change much. Orx is very conservative with memory allocations. You can observe this by spawning many objects with the left mouse button.

You can pause or unpause the profiler at any time by pressing F5.

Observe the running function call Markers. When first running the profile on the playground application, there will be no physics calls running in the engine. You can still interact with the demo in the background. If you click with the left mouse button you will spawn some physics objects.

You can profile an application with vsync on or off. In the playground application you can toggle this with the `F11` key. With vsync on, the longest bar will be the orxDisplay_Swap marker. This is not Orx working hard on a task, but rather the driver wait time for the next vertical sync.

If you spawn lots of objects you can see the time taken on the orxPhysics_Update marker increases and the orxDisplay_Swap marker decreases, as there is less time waiting, and more time updating the physics on the objects.

You can activate a history graph of frames by pressing F8 key. You will see past frames. The colors on each vertical slice correspond to the Meter Bars. 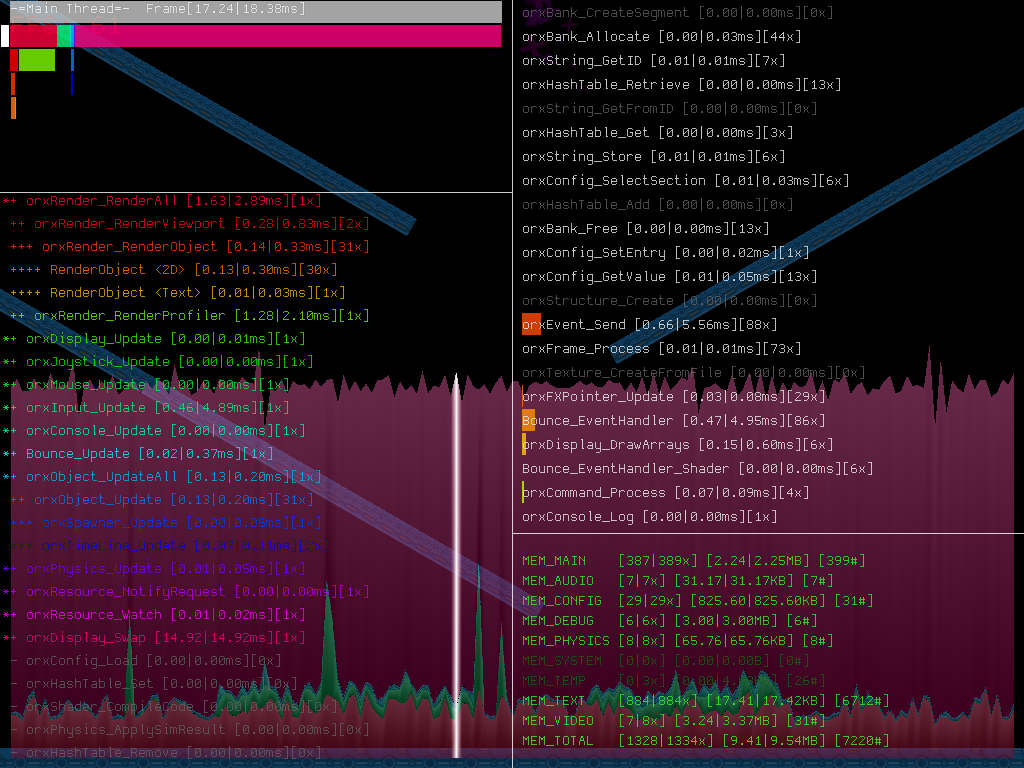 You can pause this graph with F5 and you can scroll back and forth (using the Left and Right keys) through the history to a particular frame to inspect the meters and values for each Marker to observe spikes.

The white vertical line shows the current frame being inspected.

You can get more details on a particular marker depth by using the Up and Down keys. Notice a white indicator in the Meter Bar Panel that moves up and down to the selected depth? 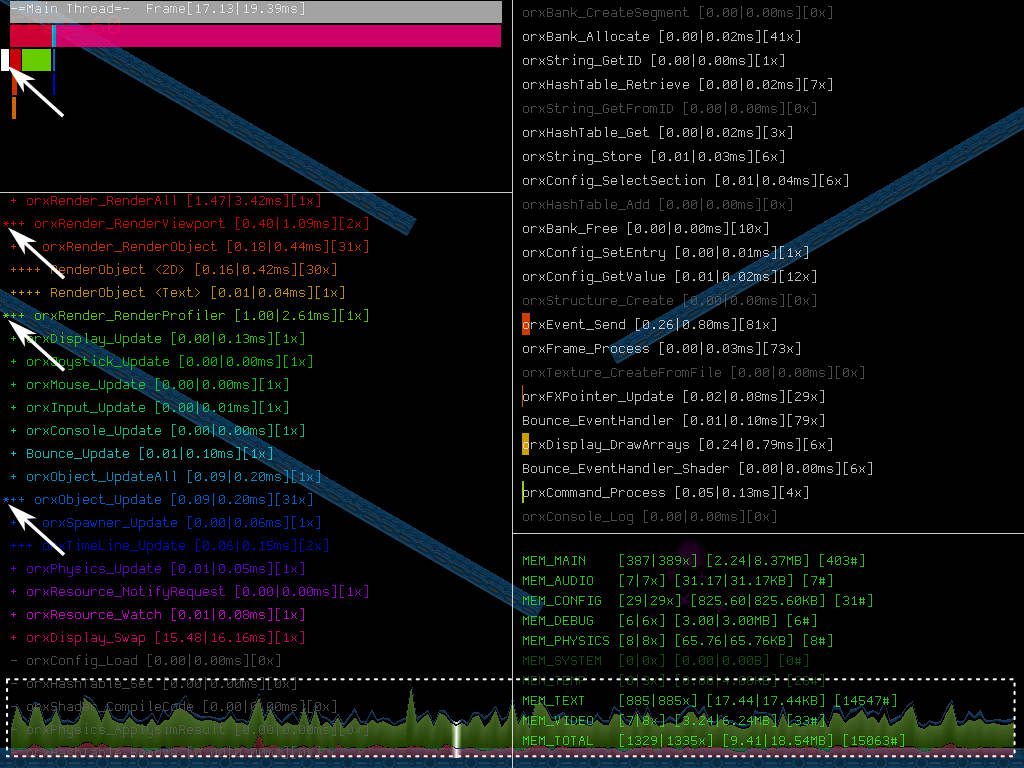 And that is the Orx Profiler. This tool should be invaluable for checking the health of your application and to help you optimize it.

The Profiler orientation can be set as either portrait or landscape. Landscape is the default. You can see the ShowProfiler and ProfilerOrientation properties available for the Profiler in the Render Config Properties:

You can set to portrait with: 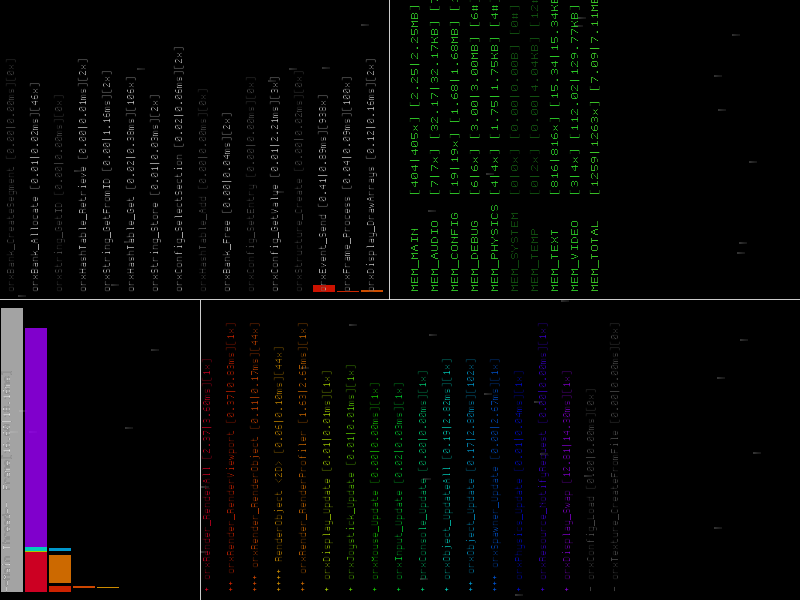 This rotates the profiler to the left, perfect for portrait monitors.